Captain John Staple's exploits against Napoleon's armies in the Iberian Peninsula have earned him the nickname 'Crazy Jack' amongst his comrades in the Dragoon Guards - but once the Battle of Waterloo brings the curtain down once and for all on the Napoleonic Wars, the boisterous, adventure-loving Captain finds life in peacetime intolerably dull.

When the Captain finds himself lost in the Pennines, he takes refuge at an unmanned toll-house. It's there that he encounters a woman of extraordinary qualities - and suddenly, his soldiering days pale away next to the adventure, and the romance, of a lifetime... 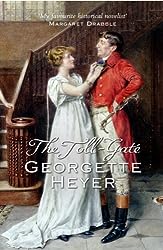 The Toll-Gate is a Regency novel by Georgette Heyer, which takes place in 1817. Unlike many of Heyer's historical novels which concentrate on a plucky heroine, this one follows the adventures of a male main character, an ex-captain in the British Army who has returned from the Peninsular War and finds life as a civilian rather dull. The setting for this detective/romance story is in and around a Toll-Gate in the Peak District, vastly different from the elegant backgrounds of London, Bath, Brighton, or some stately home, which characterize most of Heyer's Regency novels.

Articles for The Toll-Gate