Even as a fourteen-year-old orphan, Simon Beauvallet knows his own mind. Later, friend and foe alike will know better than to cross the flaxen-haired mountain of a man whose exploits in battle have earned him knighthood, lands and gilded armour.

After Agincourt, he has no equal save the king himself in generalship - until his legendary prowess is baulked by a woman. In Normandy, the icy rage of Simon the Coldheart must melt - or quench Lady Margaret, spitfire of Belremy. 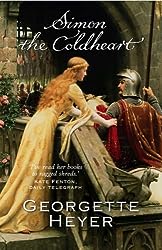 
Simon the Coldheart is a historical fiction novel by Georgette Heyer published in 1925. Not a typical Georgie Heyer regency story, it is a tale of chivalry, intrigue and conquest. Set in the medieval period during the Hundred Years' War between England and France, it is her fifth novel, and the first of only three set in that period.