John, Duke of Bedford, grew to manhood fighting for his father, King Henry IV of England, on the wild and lawless Northern Marches. A prince of the royal blood, loyal, strong, the greatest ally that his brother - the future Henry V - was to have. Filled with the clash of bitter rivalries and deadly power struggles, this is Georgette Heyer's last and most ambitious novel. 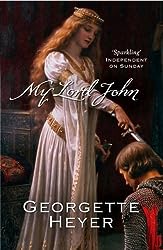 
My Lord John is an unfinished historical fiction novel by the British author Georgette Heyer, published posthumously in 1975 after her death the previous year. It traces the early lives of the "young lordings" – Harry, Thomas, John, and Humfrey – all sons of the future Lancastrian king Henry IV of England. They grow up amidst turbulent events including the 1394 pestilence, the exile of their father by Richard II, the death of their powerful grandfather John of Gaunt, and the seizure of the throne by their father. John of Lancaster serves as the novel's main character.