After her father's death, Kate was left an orphan, striving to make ends meet as a governess until her aunt Minerva rescues her from poverty.

Kate hardly knows what to expect at the grand house of Staplewood. Her uncle lives in one wing, while her handsome, moody cousin Torquil occupies another; guests are few and far between, but even family dinners are rigidly formal. And, over it all, Minerva's word is law.

But the sudden arrival of cousin Philip throws Minerva's control over the household into doubt, and Kate begins to suspect the shocking reason for Minerva's generosity. She has no-one to confide in but cousin Philip - but for reasons unknown, he seems to have taken an instant dislike to her... 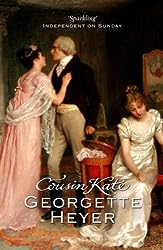 
Cousin Kate may refer to: