'Mad Nicholas' to his friends, 'Scourge of Spain' to the enemy, Sir Nicholas Beauvallet has never been known to resist a challenge.When a captured galleon yields the lovely Doña Dominica de Rada y Sylva, he vows to return her and her father to the shores of Spain. But he has no sooner done so than he proposes a venture more reckless than any of his exploits on the high seas which have made him Drake's equal and a favourite of the Queen. He will take Dominica as his bride even if he must enter the lion's den... 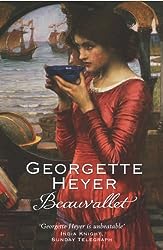 Beauvallet is a 1929 novel written by Georgette Heyer.