There could hardly have been two young women less like each other than Fanny and Serena. When the Earl of Spenborough died after remarrying late in life. Fanny, his widow, and Serena, his daughter were left alone. What made things excessively awkward was that by the terms of the will Serena's fortune, due to her on marriage, could only come to her by the approval of the Marquis of Rotherham, the man with whom she had recently broken off an engagement. The more timid Fanny felt lost, but Serena had the brilliant idea of taking a house in Bath. Fanny would be her chaperon. After all. Fanny was a dowager Countess and Serena's stepmother, even if she was several years younger than her friend.

In Regency Bath two girls whose attractions were in no way diminished by their being in mourning, could hardly escape the romantic entanglements for which the spa was famous. Soon they are in a real Bath tangle, hearts and heads sadly confused, while the quizzing glasses of the town are raised on all sides. Georgette Heyer has never given us a more attractive heroine than Serena, the girl who knows her own mind but not her own heart, and whose passionate temperament prevents her from living up to the serenity of her name; nor a more intriguing figure than the Marquis, whose brusqueness and louring looks terrify all but the boldest spirits . 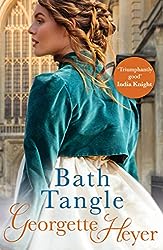 Bath Tangle is a Regency romance novel by Georgette Heyer. The story is set in 1816.