When Lord Cardross took pretty eighteen-year-old Lady Helen for his bride he also undertook to stave off financial disaster for her father, Lord Pevensey, and settle the more pressing gambling debts of her scapegrace brother Dysart. He even offered to buy Dysart a commission and send him to join Lord Wellington's army in the Peninsula. Nell maintained her family's reputation for improvidence and Cardross found him self inundated with bills from her milliners and dressmakers.

After a year of marriage it occurred to him that although he was in love with his wife, she might only have married him for his money. Nell, who in turn was in love with her husband, had so taken her Mama's warnings to heart that she hid her feelings from Cardross and was resolved not to show either knowledge or resentment should her husband have Another Connection outside the walls of their Grosvenor Square house. In addition to his concern over the state of his wife's heart and pocket the Earl had the worry of keeping his impetuous young half-sister Letty from eloping with the correct but lovelorn Jeremy Allandale, who was about to leave for a diplomatic appointment in South America.

What with sorting out Nell's and Dysart's mad scrapes, recovering the vanished Cardross necklace, and being forced into bitter suspicion, the much-tried Earl might well have missed the opportunity of smoothing the course of true, though dissimulated, love in his own marriage. Miss Heyer has made of these alarms and misunderstandings a most delightful entertainment and Nell herself is an irresistible heroine whom nobody could allow out of sight until the last page is reached . 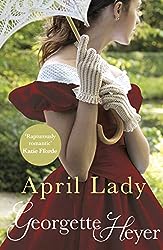 
April Lady is a Regency romance novel by Georgette Heyer. It is in many respects a classic example of her work: light, with some drama and delicately handled romance. Heyer writes from the perspective of two main characters throughout the book. The story is set in 1813.